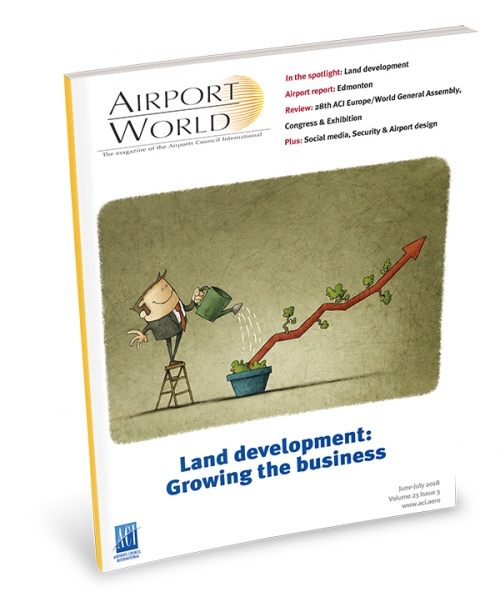 Helsinki Airport is a major hub between the East and the West. It is located 20 kilometres north of downtown Helsinki, the capital of Finland, and this year is expecting to serve 20 million passengers.

Its unique selling point is undoubtedly the fact that its location in northern Europe ensures the shortest flying times between western Europe and Asia, and this is something that Helsinki Airport continues to develop.

Indeed, it has done such a good job that passenger traffic at Helsinki was 12% up in the first five months of 2018 and the airport is currently in the midst of an expansion programme designed to raise its capacity to 30mppa.

The airport itself is located in Helsinki’s neighbouring city of Vantaa. Vantaa has a logistically superb location and is connected by Finland’s main road and railroad networks. It is easily accessible from Finland’s international ports and connected to St Petersburg by route E18 and railroad, important links between Europe to Russia.

And there are plans to improve the regional connectivity with a tunnel under the Baltic Sea to Tallinn.

Like the airport, the Helsinki region is experiencing massive growth as more people move to Finland’s southern cities for employment. Vantaa now has more than 200,000 residents and is the fastest growing city in Finland.

If at first you don’t succeed…

The first efforts to transform the area into a business hub and airport city was in the mid-1990s when the branding slogan ‘Vantaa – the airport city’, was launched, and in early 2000, the then Mayor of the City of Vantaa, Erkki Rantala, outlined a strong vision for the success of the city linked to Helsinki Airport and its connectivity.

Vantaa had another go at getting its airport city off of the ground in 2001 when the mayor invited Helsinki Airport and the owners of the land around it to work together on the airport city. The private sector owns the bulk of the land next to the 42 square kilometre airport site with the rest belonging to Finavia, the airport operator, or publicly owned by the City of Vantaa.

It was a success and shortly afterwards all the key stakeholders signed an agreement to work on the airport city project in a public-private-partnership. There were more than 10 partners including the major Nordic real estate development companies like NCC, Skanska and YIT. The city established a company, Airport Area Marketing Ltd, and in 2002, I was appointed project manager.

The main purpose of the work was to brand and promote the airport area. The idea was to actively seek value in the airport’s connectivity for all stakeholders. The area had an industrial legacy and planning was business-use and office space driven.

The power of branding

The Aviapolis team wanted to create a brand that would work as a strategic tool to promote and develop the area which we wanted to transform into a premium business location.

The key branding contents were location, connectivity, real estate (offices, services, housing), the area’s history (it has a medieval stone church), residential architecture by Alvar Aalto and, believe it or not, nature! These are important and genuine components of a holistic brand with a strong identity.

The brand name, Aviapolis, soon became an established and official name of part of the city. We set out to create a unique location that would serve as a visiting card for Finland. The right mix and profile of places for business, homes, retail, services and leisure.

And Vantaa has attracted more new jobs in Finland than anywhere else. In fact, 67% of all new jobs in the Helsinki region were created in Vantaa between 2009-2015, with the biggest growth within the city taking place at Aviapolis, which is currently responsible for more than 36,000 jobs.

Quite simply, Aviapolis has established its place as the most popular business location after downtown Helsinki and is the fastest growing destination in Finland. All economic indicators speak the same positive language.

The airport’s growing route network, led by Finnair, helped facilitate the growth. A total of 20 Asian destinations are served non-stop from Helsinki today, compared to five in 2002, while Finnair’s fleet of 70 aircraft now contains the A350-900 and is one of the most modern in Europe.

A variety of different housing types was one of the key points in planning and branding the location and making it a success. The City of Vantaa managed to incorporate housing at close distances from the airport regardless of the aircraft noise.

In 2014, the city and the Aviapolis team come up with a plan to deliver “a more liveable and sustainable future” for Helsinki’s airport city, and this has now become a reality with enough homes built for 20,000 new residents and 60,000 new jobs.

The plan was to build residential areas with individual identities and a strong sense of community. Art, versatile architecture, culture, nature and facilities for outdoor activity were some of the ways to create inviting areas for homeowners.

With great connections, varied workplaces and quality schooling, these residential areas have proven to be a winning formula for City of Vantaa.

Capitalising on the connectivity

Successful collaboration requires a team building attitude, strong will to work towards a common goal and a level of trust. There are, of course, many of different ways of thinking and working. In Aviapolis’ case, the City of Vantaa has shown unusual agility and ability in land use planning for the long-term.

And success could not have happened without the business-friendly attitude of the city and its easily accessible services for different companies.

Aviapolis is an example of a winning formula for all stakeholders and has become what we all hoped it would when work started on the project – a next generation hub.

We managed to capitalise on the connectivity. Mutual ground, goals to work on and a guiding vision are required as is branding that is truthful and honest and not misleading or vague.

Whatever they are called (aerotropolis, airport centric developments etc), the global debate on the merits of airport city developments will continue long into the future. I, personally, see great potential in airports and airport regions to build on their respective connectivity.

One thing is for certain, airports and other transit hubs continue to create value driven by connectivity. The winners of tomorrow will be the locations which understand this best and move forward with an inclusive and innovative vision.

About the author: Mari Peltomäki worked as Aviapolis’ project manager between 2002-2015. Today she runs her own boutique advisory company, Art Palace International (www.artpalace.fi), and regularly speaks about connectivity at industry events.